We are a family run business which began in 1920 when Edward Stringer set up the business and spent his days decorating while the nights found him making up paints and preparing wallpaper which came untrimmed. None of your modern day technology!

In 1930 his son Edward Jnr became a skilled paper hanger and they worked closely together throughout the 1930s. Edward’s son Richard ran a decorating arm in the 1980s employing and training local decorators. At this time there were 3 generations of Stringers working together. In 2002 Stringers Home Decorating Centre relocated to Manning Road and continue to serve Bourne and beyond. 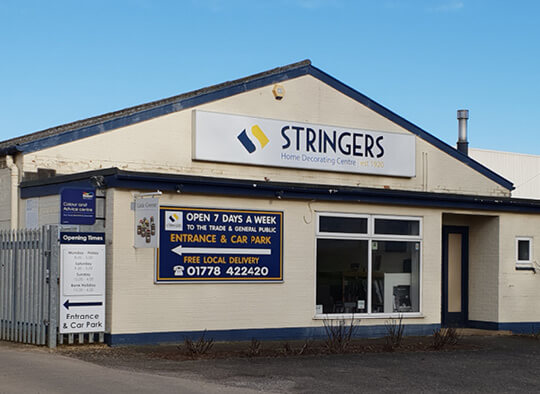 Since 1920 the Stringer family have been providing advice and serving the Bourne community. Max is the 4th generation of Stringers to continue running the business. With more than 25 years of personal experience in all DIY Max has a broad range of technical knowledge.

Before our store moved to Manning Road Stringers was in the centre of Bourne in a quaint shop on Abbey Road. Sam joined us in 2001 and was part of the relocation process to Manning Road. She has years of experience and has built up many friendships with our regular customers; many ask for her to serve them when they visit.

Steve joined the Stringers family business in 2010 after years of knowledge gained from working at major trade and DIY retailers. His honest approach is greatly received by our trade customers who always know Steve will be able to source the product they need for the job.

As a creative, arty lady Michelle has a keen eye for colour and design. She has a degree in Graphic Design and Illustration and uses this skill to create individual name paintings. With a cheerful and patient manner, she enjoys spending time with customers advising them on their projects.

As a lover of craft and design Rachel brings a wealth of ideas and style to the team. She is very creative and often uses her spare time to bring her ideas to life. Her background is within Primary Schools giving her a calm, logical approach when helping clients decide on colour schemes for their projects.

Louise has a bubbly personality and always has a warm greeting for everyone she meets. She is full of ideas and gets inspired by chatting to our customers and often tries the products out in her spare time. With her love of home improvements, she is a worthy and valued part of the Stringer team.

We are proud to have served our customers for a century over 4 generations. Thank you for your custom and we look forward to welcoming you in store in future years.